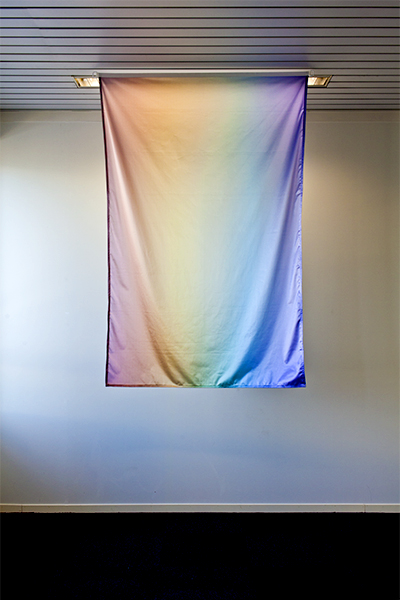 I have always felt that the LGBT “rainbow" flag was a monumental symbol that, while well-intentioned, did not live up to its full potential which was to symbolize the merging of many forms of queer identity – both sexual and non-sexual.

In some sense the original design of the flag establishes and supports an artificial separation between "types" of queerness. Since it features delineations of one solid stripe for each color and each color was sharply separated from the other. As a result, a great many people (and this has been confirmed in my discussions when exhibiting the piece) feel left out of the discussion when their sense of sexuality lands somewhere in undefined territory.

In order to create a more effective version of this symbolic flag, I filtered pure white sunlight into its full gradation of visible colors using a spectral prism and then photographed the resulting projection on a white wall. The image was then digitally dye-sublimated into a flag – a New Flag for all entities. This work attempts to address queerness at its most subtle and fundamental level. It speaks to the existence in all of humanity of a deeply innate and authentic multiplicity across an infinitely varied spectrum.