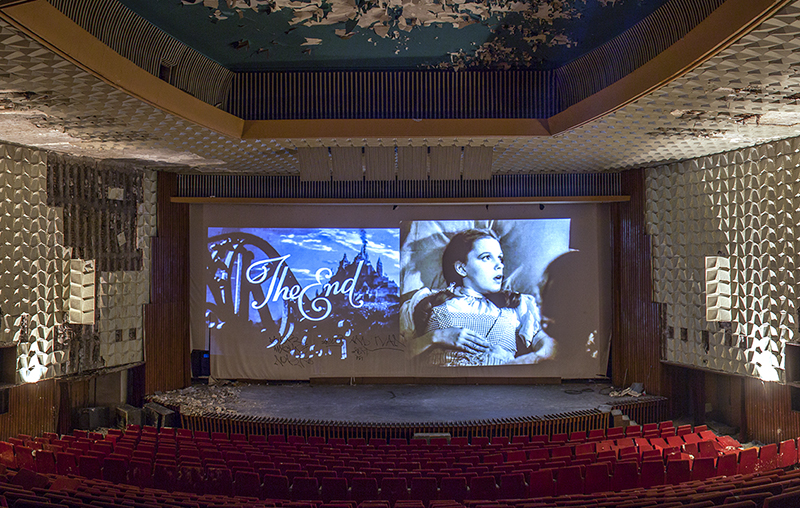 The End Is Only The Beginning of Another Story (American Endings #1-25)
Premiere Installation. Kino Kosmos, Plovdiv, Bulgaria.
Courtesy of Open Arts Foundation & US Department of State

Featuring a stereoscopic view of the final scenes from each of the most popular American films as determined by the American Film Institute's 100 Films/100 Years list, this projected video work indexes and contrasts archetypal final scenes or "endings" from the collective mythology of American cinema. Final ending scenes from each film are played in the order of their ranking side-by-side and otherwise allowed to interact together at random.

As a further acknowledgement of the continuing shift away from the shared moviehouse experience, footage was sourced from the internet to purposefully employ the jumps and starts of the delivery mediums through which many of these films are now perceived by viewers in the 21st century.

The work is divided into 4 films featuring 25 endings each. The first film features the sequence of American Endings No.1 through No.25 and is titled The End Is Only The Beginning of Another Story. The inaugural sequence premiered at Kino Kosmos, a condemned late Soviet-era movie palace in collaboration with the Sariev Contemporary Gallery and Open Arts Foundation of Plovdiv, Bulgaria. This inaugural sequence was made possible with generous support of the United States Department of State.